The days of Las Lomas students darting over to San Miguel Plaza after school to grab a couple Taco Bell specials are over. Instead, they can check out Dunkin’ Donuts, which took over the old Taco Bell space and has seen lines around the corner in its first week of business.

Dunkin’ Donuts will be open from 5 a.m. to 9 p.m. every day and serves a variety of breakfast sandwiches, coffee drinks and, as the name implies, donuts. The East Coast-based chain is incredibly popular in other regions of the country and now adds another well-known food and drink option to Walnut Creek’s growing downtown.

For a town that recently rid itself of the long-standing McDonald’s and has now cut its Taco Bell consumption in half, this may be a surprising add (especially given 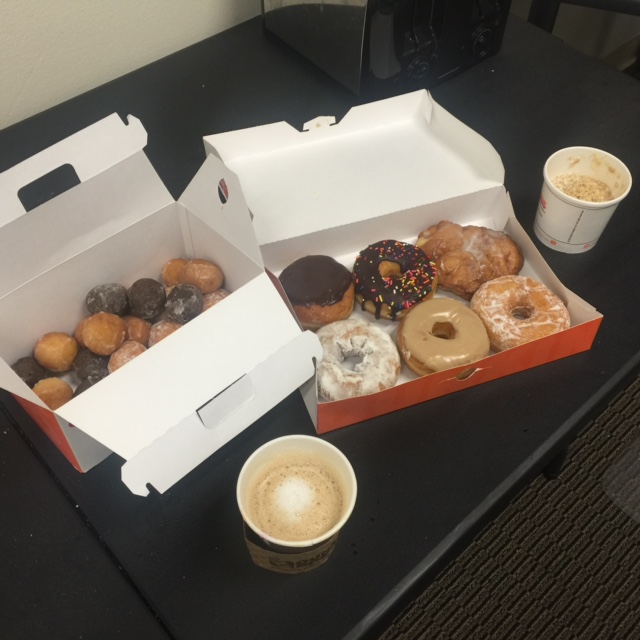 Dunkin’ Donuts’ proximity to Whole Foods), but the world can never have enough coffee shops!

I decided to visit Dunkin’ Donuts this morning and see what all the fuss was about. I waited in a long line, as expected, before being helped by a very kind girl at the register. They offer a lot more than just donuts at Dunkin’, though their only healthy choice is the oatmeal. I tried their cappuccino, some donuts (Bavarian chocolate donut and the fritter, among others) and a variety of

The coffee was amazing. I asked why, and they said it was because they never let it sit for more than 15 minutes at a time. And the donuts, which tasted a lot less fried than they do at other places, were really good! I chatted with an East Coaster who said he now feels complete with a Dunkin’ Donuts in town.

The parking is easy in that plaza, especially in mornings before the other businesses open up. I have a feeling that Dunkin’ will develop quite a following!