We’re rapidly approaching November, which means it’s almost time for the Presidential election (and all the other ballot races, too!). I encourage everyone to educate themselves on the candidates, check that you are properly registered to vote, and then either request mail-in ballots or make a plan to vote in person safely on November 3rd. In California, if all goes as planned, every registered regular voter in the state can expect to get a ballot in the mail before the election. There will still be in-person voting options for those ballots who have been torn, pet-chewed, or food-splattered, and for those who just go to their voting stations out of habit. In Walnut Creek, you can also turn in your ballot at City Hall and avoid any potential issues with the Post Office.

Here is all the information you need about your own voter registration. You can check if you are registered, or re-register if necessary, at this link: https://registertovote.ca.gov/

To vote by mail in California, follow these instructions: https://voterguide.sos.ca.gov/voter-info/vote-by-mail.htm

And, finally, for those who want to get seriously educated on the candidates and policies, I suggest reading the book Thank You For Voting by Erin Geiger Smith. I read it recently, and it was really helpful to get some context on the voting system in America and give me some insight into the process of democracy. I also learned some interesting tidbits (for example, do you know why 18-year-olds were given the right to vote?).

No matter who you support or which way you lean, politically, I think it’s important for us to exercise our rights to vote and make our voices heard in every election and to be involved in our local elections. Make sure you get your vote in on or before November 3rd!

It’s no secret that the housing market has been unbalanced over the past few years. Prices have been rising, and with them, so have average home loans. 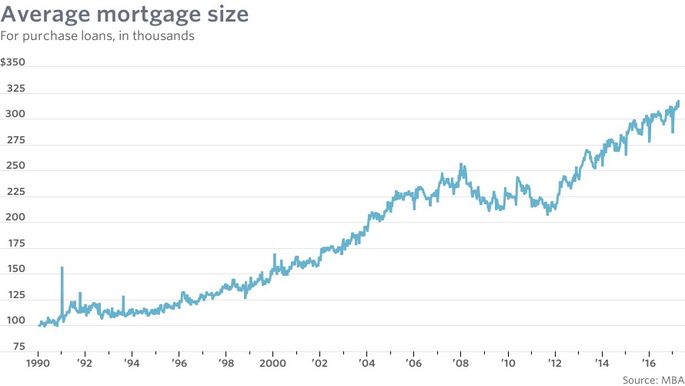 According to The Mortgage Bankers Association (MBA), the average home loan size is the largest its been in the history of its survey, which began in 1990.

Additionally, the median mortgage size was only about 3.3 times the median annual income in 1990 – now, it’s more than 5 times as big. This is likely due to the increase in housing prices, buyers getting bigger homes and lower interest rates over the years.

Here’s a look at some housing market characteristics for select years.

According to Mike Ervin of Supreme Lending, people are just waiting and waiting for mortgage rates to go down. People who are using securitizers like Fannie Mae and Freddie Mac have to wait until the Fed buys up more mortgage bonds so that rates will go down. It is unknown if that will happen, but rates have dropped in 2017.

Multiple factors can affect the bond and mortgage markets. The most recent major event was the Trump election and presidency, which saw a large immediate increase in mortgage rates, which have since rebounded, even with the Fed raising rates.

In California, we are in the wealth-building business and real estate in the Bay Area is going to be a good investment for years to come. I am here to advise, provide insight and help you build wealth through real estate.

A few years ago, I participated in the Walnut Creek Citizens Institute classes. It was a great experience educating me about the ins and outs of the way the city runs Walnut Creek, and a way to get involved with various city initiatives.

For those who haven’t heard of it, the Citizens Institute is a 7-session class that includes tours, presentations and Q&A gatherings with City Council members, the City Manager, the Police and Transportation departments. It gives a good chance to get up close and personal with those who make decisions for our town.

Topics for 2017 will include city finances, getting to know the WCPD, the role of public works and how to improve one’s quality of life in Walnut Creek. The final class meets on Apr. 1 for a graduation of sorts, including a neighborhood showcase and lunch.

If you live in Walnut Creek or are thinking about moving here, it’s a good opportunity to further increase your knowledge of this wonderful city and how it operates. If we learned anything from the Presidential election, it’s that every level of government is essential and it is important to be involved and participate!

We’ve seen rates increase since Donald Trump won the election. Now, the Fed is saying they’ll do three rate hikes instead of the expected two in 2017. This caused rates to bump up about half a percent. What do interest rate increases mean in regards to a buyer’s payment and the overall market?

According to The Wall Street Journal, if we adjust for inflation since 2006, housing prices are actually 16 percent below their 2006 peaks in most areas.  Many economists are saying the demand for housing remains as strong as ever and that recent rate increases will have a minimal effect.

However, people usually make home purchases based on payment. So as interest rates increase, somebody thinking of purchasing should know a 1/2 percent increase in rates for a $500,000 loan, increases the payment about $140-$150 (and even less after “tax benefits”).

Should buyers and borrowers wait to see if rates fall before moving forward with transactions? Jay Voorhees of JVM Lending says absolutely not. Borrowers can easily take advantage of no-cost refi’s if rates fall.

And, as Gary Shilling wrote in a Forbes column on Dec. 6, he thinks the markets massively overreacted to Trump’s election. He points out that the root causes of weak economic growth (that have kept rates low) will remain. He also says that Trump’s proposed tax cuts and stimulus programs will be watered down by Congress; the expectations of an economic boom are overblown.

What do you believe? Are you bullish or bearish? This election reinforced the notion that nobody has a crystal ball and sitting on the fence waiting for one outcome or another may be the worst thing you can do.

I thought this might be interesting to share. Traditionally, there is very little on the market as we enter the holiday season. The last couple years, sellers listing in December and the beginning of January tended to have multiple offers because there isn’t much inventory (meaning, people don’t like to have Open Houses or showings during the holiday season as they are usually entertaining family or friends).

With the Presidential election around the corner, many agents are getting the feel the market has softened. It will be interesting to see how this year’s election will affect our market. Here are some insights from my friend Jay Vorhees at JVM Lending:

We have blogged several times about how rates are not held artificially low prior to major elections. It is a myth that they are. Presidents, in fact, like to see proof that the economy is getting stronger, and these signs usually push rates higher. Presidents hope for positive signs like GDP growth, job growth, lower unemployment, etc. These signs usually push investors into stocks and out of bonds, causing rates to go up.

With respect to Donald Trump and Hillary Clinton, it is all about “stability.” Stock market investors like “stability” as much as they like growth. Worries about instability or shakeups send investors away from stocks and into the safety of bonds (pushing rates down).

Investors believe that Clinton will follow President Obama’s course, and this is perceived as “stability.” So, signs that Clinton might win will probably keep investors in stocks, which will ultimately keep rates largely the same.

This is very similar to the uncertainty the Brexit vote created and its influence in pushing rates lower.